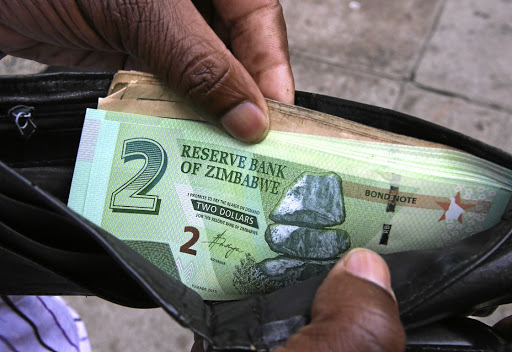 Zimbabweans are sceptical, fearing they will again be left with worthless paper in place of real money, writes Dianna Games.

Resistance to Zimbabwe’s new "currency" has not disappeared nearly two months after bond notes were introduced amid widespread protests by citizens who feared the notes were a step back into the past.

The Reserve Bank of Zimbabwe is feeding the quasi-currency into the system in tranches. In the first phase, the equivalent of just under $80m is being circulated. But a lack of trust persists. After all, the exercise is being presided over by the same government that took the country to 80-billion percent inflation less than a decade ago.

The new notes resemble the much-despised Zimbabwe dollars, last used in 2009 when the multicurrency system was introduced.

The US dollar was just one of nine currencies designated as legal tender, but its popularity for trade and commerce rose from 49% in 2009 to 95% in 2016. The rand’s use has declined despite the fact that more than 40% of Zimbabwe’s exports are to SA and 60% of its imports come from here.

Zimbabwe’s high import bill, lack of foreign direct investment and the illegal movement of dollars offshore have eroded stocks of the US currency.

A novel black market has emerged in which dollars are sold at a premium for yet more dollars. One Zimbabwean says he regularly has customers in supermarket queues offering to pay for his goods with a card in return for the US dollars in his hand.

The bond notes are a drop in the ocean in terms of demand for cash, but the central bank hopes that by managing the supply, the parity with the US dollar will be preserved. It maintains that it will not circulate more than the originally denominated $200m worth of bond notes to preserve their value.

Zimbabweans are sceptical, fearing that in time they will again be left with worthless paper in place of real money. This has led to hoarding of cash, and those who can are building US dollar nests outside the country, exacerbating the problem.

While the bond notes may have some usefulness in this embattled market, their existence is again isolating Zimbabwe as it cannot use the quasi-currency to pay for its imports. The notion of a nontradable currency is also unattractive to investors, already wary of Zimbabwe’s high-risk reputation.

Even public servants, desperate for the 13th cheque they were promised in 2016, have refused to accept bond notes — or the residential stands being offered by the government — in lieu of hard currency. The 2015 bonuses were paid in April 2016.

Government workers are seen as a key voting bloc and with elections coming up in 2018, Zanu-PF cannot afford to lose their favour during 2017. But once the bonuses are paid, there is the thorny issue of monthly salaries.

The government has turned to treasury bills (TBs) for funding, issuing $1.2bn of TBs between 2012 and mid-2016. But it has failed to honour bills maturing in 2016. Banks, suffering from high levels of nonperforming loans, have been active in the TB market; the default raises fears of rising risk.

As serious as the liquidity crisis is, the bigger problem is a political one. Zanu-PF’s economic machinations now, as in the past, are about avoiding structural reform and political accountability.

As the country cranks up the electoral machinery for 2018, a political solution to the mounting socioeconomic crisis is likely to be more elusive than ever. - Published in Business Day SA, 16 January 2017. Picture: Reuters