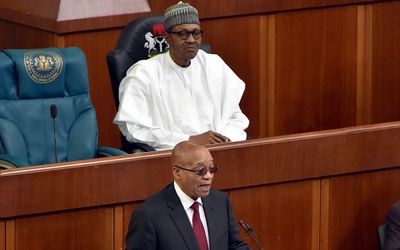 PRESIDENT Jacob Zuma undertook a state visit to Nigeria last week – a country he knows very well. But the Nigeria that President Jacob Zuma encountered on his short state visit last week is a totally different country to the one that hosted him in the 1970s as an exiled African National Congress (ANC) operative, WRITES SAM MKOKELI

A few incidents in recent years revealed a deepening gulf between SA and Africa’s largest economy, but Nigeria rolled out the red carpet for Zuma as Africa’s superpowers try to revive their diplomatic and economic ties. The tension would have been palpable right up to the moment President Muhammadu Buhari accused SA of unwittingly aiding terrorism in Nigeria.

The countries have a long history of co-operation and conflict. After gaining independence in 1960, the Nigerian government vowed to help free other African nations from the clutches of colonialism. Nigeria played host to and supported ANC leaders in the 1970s. They included Zuma and his predecessor Thabo Mbeki.

But by the time the ANC came to power in 1994, it was sceptical of Nigeria’s military rule and its concomitant lack of respect for human rights. Nelson Mandela went as far as calling for Nigeria’s expulsion from the Commonwealth. The tensions reached boiling point after Sani Abacha’s government upheld the decision to execute writer and activist Ken Saro-Wiwa and a group known as the Ogoni Nine. Read more